Jim is the President and Owner of Long Lake Marina. He purchased Long Lake Marina in May of 1999 and then became the President and CEO in January of 2002. Prior to entering the marine industry, Jim went to college and got his degree in criminal justice and environmental science from Raritan Valley College. He began his career for the New Jersey Transit Police Department in 1983. He then transferred over to the Montgomery Township Police Department in Belle Mead, New Jersey in 1985. He then retired from the Montgomery Township Police Department in January of 2002. Jim’s hobbies include hiking, fishing, boating, and he is an antique car enthusiast. His 1970 Ford Mustang and 1966 Ford Bronco can be seen driving around in the summer months. He also enjoys football, ice hockey, snowmobiling, water sports, and beer stein collecting. James is native of New Jersey along with the rest of the Davenport clan. James learned the ins and outs of the family business and after college was prepared to jump in as the Sales and Marketing Director. With a vision and a talented team of people, James has led Long Lake Marina to multiple Yamaha Super High Output CSI Awards and consecutive CSI Awards with Tahoe for 10+ years. In his free time, he enjoys working at the marina and spending time with his one eyed German Shorthaired Pointer, Hunter. Next time you see him, ask him about the time we took him skiing. Jon grew up in and around the lake’s region of Maine. He started his career at the marina during the summer of 2013 in the service department. Jon has since moved into a sales position and is now the best medium tall salesman east of the Mississippi. He is a fan of Vin Diesel, tan Tacomas, and riding his dirt bike through the woods at night. Next time you see him ask him about his upcoming base-jumping trip. 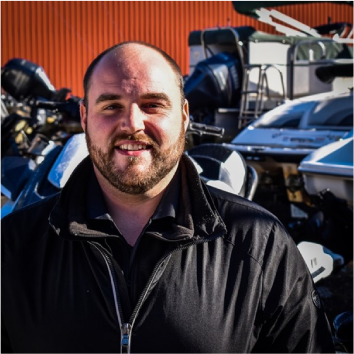 Chris is new to the Long Lake Marina crew. Starting his journey with us on staff outing day in August 2020. Chris works as a service writer and is the face of customer interaction for the service department. Chris is a graduate of USM and grew up in Michigan. He is very family oriented and likes spending time hiking with his three kids. Next time you see him about his first day on the job Emis a native of Poland, Maine and has been with LLM since 2019. She currently acts as our Delivery Coordinator. She is a SNHU alum and enjoys hiking, skiing, and she adores her Volkswagen Jetta. Next time you see her, ask her about her Vans addiction. Kyle grew up in Western Maine and has been with us since the summer of 2017. Starting as an Apprentice Technician Kyle has since moved into a Service Technician role. Kyle enjoys riding his 4-wheeler in the summer, snowmobile in the winter, and will eat anything his mom cooks. Follow Kyle's adventures @fullsend207 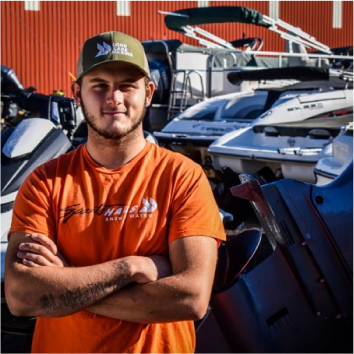 Sean joined the crew in June 2020 and works as a service technician. Sean is a native of Oxford Hills and spends his time off with his dog Zula. He enjoys four wheeling through the wilderness and his favorite part of the Marina is the people and comradery. Next time you see him ask him about the fart can on his Subaru Al is a native of Windham and came aboard in a sales role during 2019. Since then, Al now manages the Bridgton location and is our pontoon, dock and boat lift specialist. In a previous life Al worked as a commercial fisherman in Portland. He enjoys shredding the trails in his side by side, selling party barges and the Jamaican Vibrations Amazon music channel. Next time you see him ask him about his hand modeling career.

Stephen started in the marine industry during high school and went on to Marine Mechanics Institute in Florida. Stephen has been with Long Lake Marina for the better part of seven years. Stephen is one of our Service Technicians is certified in Mercury, Yamaha, and PCM engines. He enjoys four wheeling, snowmobiling, and spending time with his family. Next time you see him, ask him about the time Kyle ran out of gas. The man with the pineapple shirt started with the marina during the summer of 2016. He is originally from Baltimore and is a Clarkson University alumnus. Darby works as the Head of QRF / Operations Manager. Darby puts Old Bay on everything he eats and has had his beard for six years. Next time you see him, ask him when he is going to shave next. Bob has a rich history in the marine industry. Between spending time in the Caribbean to working on Casco Bat for Ripple Effect, Bob is a very well rounded individual. In a past life Bob was a Navy Submariner, working and living under water on a nuclear sub. Bob currently works as our rigging specialist meaning he is responsible for set up and rigging of all new inventory that arrives on sight. Long story short, he gets to play with all the new stuff. Next time you see him, ask him why he doesn’t like working on Yamahas. Steve has been with us for quite some time. He started with us 21 years ago as a dock hand and has worked his way up to Lead Service Technician. He is actually out longest standing employee! Steve is certified in Yamaha, Mercury, and PCM Engines. Steve is part of the rip squad and full send 207. During the offseason he enjoys snowmobiling, shredding the mountain, and spending time with his family. Next time you see him, ask him about his ’72 Cutlass 442. 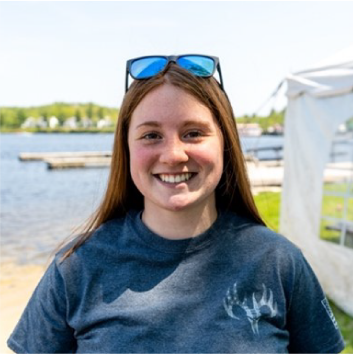 Emma is our newest recruit. Born and raised in Wakefield, NH. Emma graduated from Spaulding High School and is currently enrolled at Great Bay Community College for Business Administration. She currently is our Front Desk Liaison which means she is the point of contact for all incoming messages. Feel free to give her a call to chat! In her free time, she enjoys snowboarding, fishing, and spending time with friends and family. Next time you see her ask her about her expansive sneaker collection. 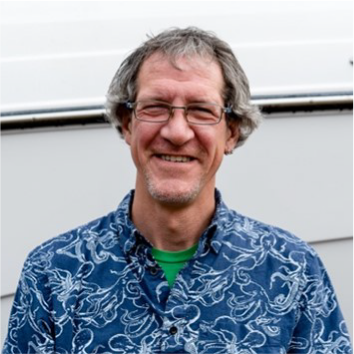 Originally from Wells, Maine and spending his summers on the lake in Western Maine. Drew has a passion for the outdoors and lake life. He joined us as the Parts Manager in 2020. Professionally Drew has over 15 years of experience in parts management and used to work at BMW Motorcycle. In his free time Drew enjoys hiking and snowboarding. Although you might not see drew as he is surrounded by cardboard most days, if you do, ask him about completing the New England 67. 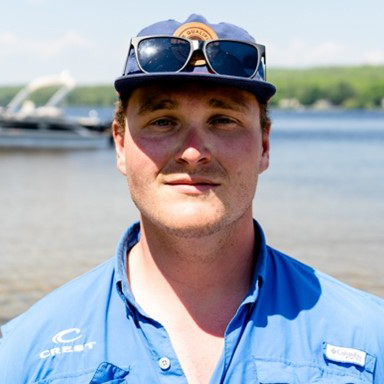 Greg is the highest educated member of the Marina team. He is also our Delivery Captain and knows everything there is to know about owning a boat. During the off-season Greg is a professor at the University of Massachusetts. Part of his duty as Delivery Captain is to teach you everything you need to know about owning a boat. In his free time, Greg enjoys skiing, golfing, and traveling with his friends. Next time you see him, ask him why he got rid of the mustache. Originally from Westport Ma. Rick was raised on the water with his family marina that designs the Tripp Angler. Rick moved to Maine with his family and lived at a marina and worked side by side with his father till he was old enough to be hired on as an employee. After high school Rick joined the US Coast Guard and spent 12 years running search and rescue missions, anti-terrorism, and working with the Secret Service. From there Rick moved out west to be a service manager at MasterCraft Seattle. Rick joined us in 2020 after he moved back to Maine to be closer to his family. In his free time Rick enjoys wake surfing and relaxing on the lake. Hunter has been a member of the Long Lake Marina team for the past ten years. He started as a detailer and is now on our facilities team. Hunter was born and raised in Bridgton and likes snowboarding and hanging out with his three sons in his free time. Chris joined us in 2015 after spending six years managing a warehouse for a food distribution company. He was looking for a career change and it just so happened that his girlfriend's father (Jim Davenport) owned a marina. Chris started out as a Customer Service Advisor in our service department and has since been promoted to General Manager of Long Lake Marina. Chris's responsibilities include working through big issues and improving employee morale. In his free time Chris enjoys long motorcycle rides with his now wife Melissa and spending time with his kids. His favorite part of working at Long Lake Marina is the customer interaction as he did not have much of that in the warehouse. Next time you see him, ask him about the time he was attacked by chipmunks. Kelly is a self-confessed Air Force brat. Growing up her father was in the Air Force which brought the family all around the world. Born in Maine and raised all over, Kelly finished high school in Utah and came back to Maine for college. Kelly is our assistant bookkeeper here at the Marina and has been with us since 2019. Aside from spending time with her two daughters she enjoys hiking, going to baseball games, and working on stained glass in her free time. If you happen to run into Kelly, ask her about her two Himalayan Dwarf Goats. 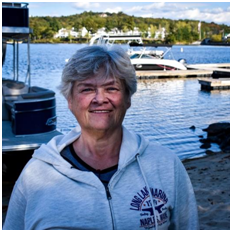 Cheryl is part of our accounting team and has been with us since 2014. Before Long Lake Marina Cheryl was part of Bill Dodge Auto Group. In her free time, she enjoys renovating her house in Standish. Next time you see her ask her about her freshly updated bathroom